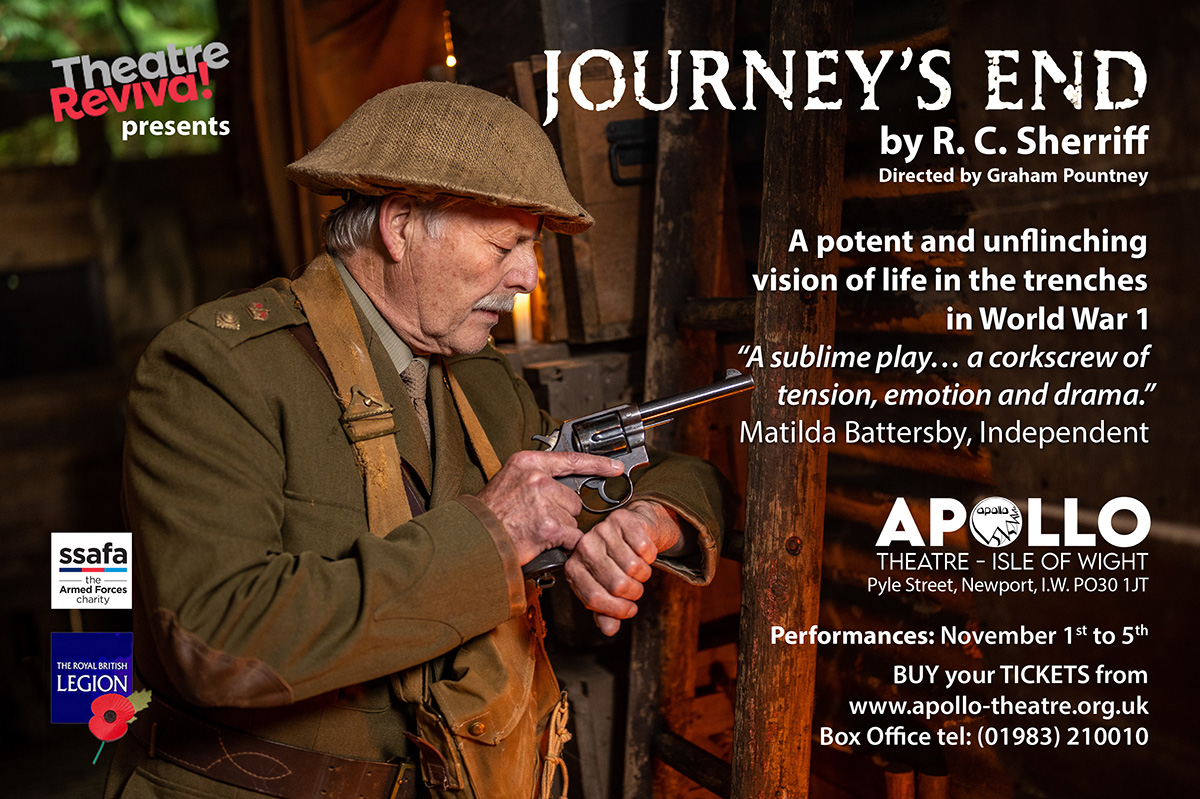 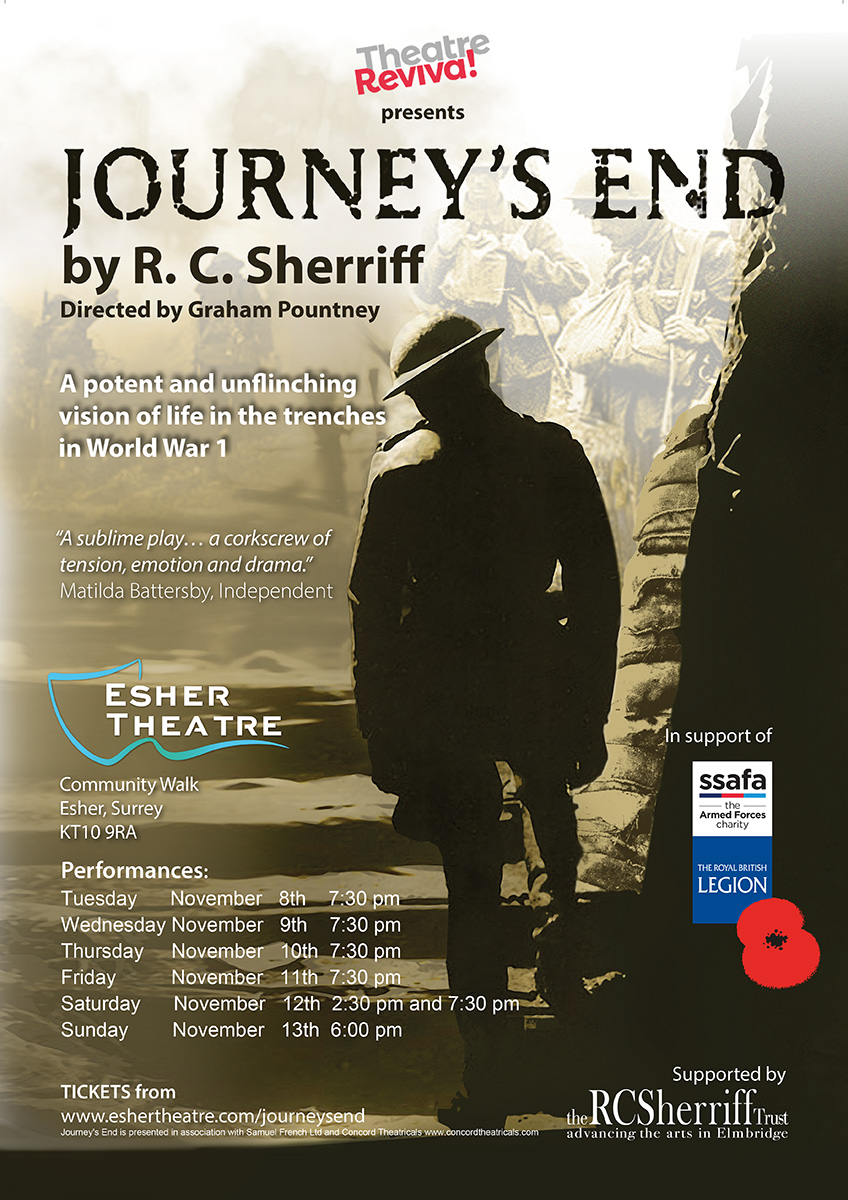 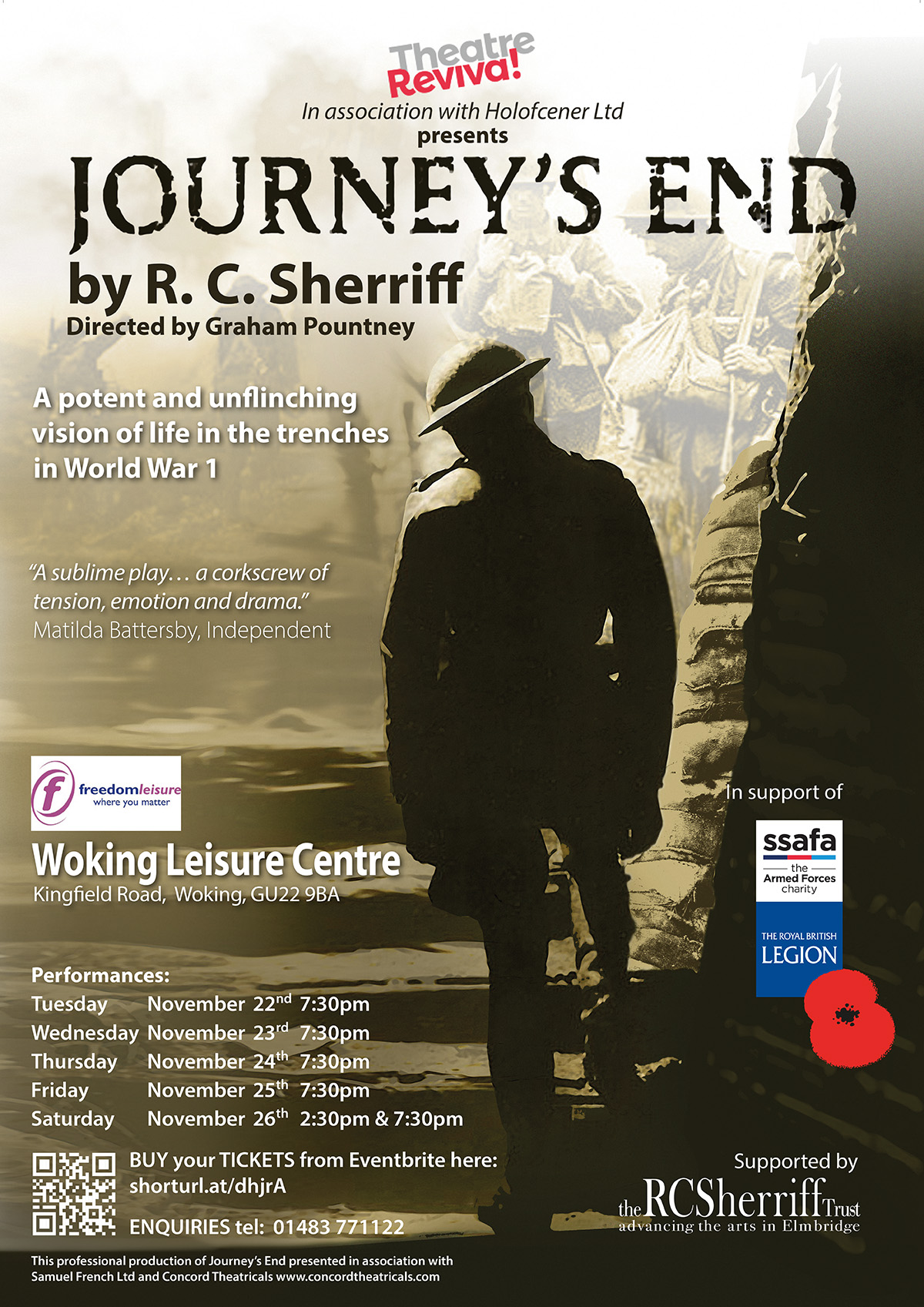 Set in an extraordinarily realistic frontline dug-out during the First World War, the story plays out over four days in March 1918, as five British Officers wait for an upcoming attack.

Full of beautifully observed humanity and understated heroism, R.C.Sherriff drew on his own personal experiences in the trenches whilst a Captain in the East Surrey Regiment.  The first-hand authenticity, told through a funny, exciting, shocking and poignant script has kept the play, and subsequent films, a triumph for a full 90 years.

“No other British play about the Great War by a veteran, has ever topped it” declares IoW resident Director, Graham Pountney.  “We are delighted to bring this amazing production to the Island, after Covid postponed it over a year ago!  It’s also very fitting in the lead-up to Remembrance week and Poppy Day.”

The production commemorates the end of the Great War and recalls the sacrifices of those who never returned.  It’s especially poignant now, as Russia continues its invasion of Ukraine. Lest we forget.

With this production Theatre Reviva! is helping two veterans’ charities – the RBL Poppy Appeal and SSAFA – to raise funds and awareness of their veterans’ families welfare work.

This is a fresh revival of Journey’s End by Theatre Reviva! for 2022.  Here’s what people said about it last time:

‘We left the theatre so stunned by what we had witnessed, my wife and I hardly spoke on the drive home.  Magnificently performed by the cast: tragic, poignant and heart-rending were just some of the words that eventually came to mind.  I’d recommend it to anyone.’
GA

‘Absolutely amazing performance. Blown away by the ending. So moving and poignant. Wow!!’
A Pickering

‘The play was awesome. VERY well done. All extremely moving – should be in the West End.’
MM

‘An extremely moving production and performance from a highly talented company’
Prof. A Bowman

In November 2021 we revived Journey’s End to celebrate Armistice Day (Poppy Day) in the new Esher Theatre, in Surrey.

An extraordinary, gripping production of a great anti-war classic, full of beautifully observed humanity: Set in the trenches during the First World War, this story plays out in a dugout over four days, from 18th March to 21st March 1918, during the run-up to the last major German offensive of the War.

Five British officers are preparing apprehensively for the upcoming attack. Raleigh, an eighteen-year-old officer fresh out of English public school, joins the company of his friend and cricketing hero Captain Stanhope and finds him dramatically changed. Osborne, the 2nd in command, is a middle-aged public school teacher and father figure. Trotter, who has worked his way up through the ranks, has a drily humorous response to the officers’ situation, whilst Hibbert reveals a ‘less than British’ attitude to their predicament.

We’re part of the inaugural season of the newly restored Esher Theatre; a stage where RC Sherriff himself trod the boards.

We also helped to raise funds for SSAFA and the RBL.

In the summer of 2021 we teamed up with Close Quarter Productions to present:

AFTER ALL THESE YEARS

The Weatherman – Still Dancers – An Occasional Cup of Tea

A Comedy-Drama, direct from the Brighton Fringe Festival 2021.

“Delightful vignettes of reminiscences and regrets, forgetfulness and the future.”

This three-act Chekhovian elegy for the dance of age is in a league of its own. A superb play, it should be, as one director present said, in the West End. Some of the finest acting I’ve seen at the Fringe.”

A delicious chance to enjoy three linked short plays – where time has a habit of taking its revenges… and having the last laugh!

Chuckles, belly-laughs, whimsy, pathos and shocks – not to mention the revival of The Weatherman – last seen hilariously in 2019!

Keep an eye out for squalls of laughter when we meet the wives!

After All These Years is a trim three-act comedy play developed from the acclaimed one-act comedy The Weatherman.

Alf and Joan, Charlie and Marianne are two former showbiz couples whose later years leave much to be desired. Time takes its revenges. Secrets will out.

And just how well do they know each other after all these years?

In 2019, under the title
Summer Love we presented a lively selection of three short plays.

Click on the linked titles above to see a taster video clip of each play.

There were two very special ones by Anthony Minghella, (writer/director of the film The English Patient):   Hang Up –  a captivating two-hander between two long-distant lovers and Days Like These – a riveting monologue of reminiscence.  The third play was The Weatherman by new writer Giles Cole; a laugh-out-loud contemplation of love in the third age!  Graham Pountney directed a wonderfully focused evening,  featuring Virginia Stride, Rupert Bates, Alex Mircica and Pamela Donald.

We’re a young, professional Theatre Company from Ryde, Isle of Wight.
We serve the local area with revivals of popular, entertaining and thought-provoking theatre!

We use local talent back-stage and on-stage and we’re bringing back into the community an opportunity for audiences to enjoy seasonal, affordable theatre productions.

Come and see our exciting shows!

We are a not-for-profit, professional Theatre Company, serving the local community with popular, entertaining and thought-provoking theatre. We also use local talent backstage and on-stage, and are bringing seasonal repertory theatre back into fashion! You’ll have a great evening!

A brand new theatre opened in September 2021 in the centre of Esher. King George’s Hall,is now a state-of-the-art theatre and performing arts venue.

We are reviving seasonal theatre productions in the Isle of Wight, Surrey and  the south of England because we passionately believe in entertaining local audiences, at affordable prices.

We present classic and culturally significant plays – as well as fun, poignant and diverting entertainments.

We are planning to present major shows on schools’ English and Drama curricula – and we’ll be running Technical Skills Workshops for young people in association with Theatrical Youth Training (TYT).

Our productions are always ambitious, popular and often thought-provoking.

Graham is a Ryde resident, an actor, director, producer and communications skills coach.  He grew up in West Byfleet and East Horsley, raised a family in Stoke d’Abernon and Leatherhead and now lives in Ryde, Isle of Wight with his wife Suki Turner.

With 45 years in the performing media his career has encompassed Weekly Rep and Repetory Theatre in the UK and International touring, working with the Royal National Theatre and in London’s West End.

Graham was recently the Associate Artistic Director of the Leatherhead Theatre Rep Company. He has been creating, producing and directing plays, films, workshops, radio programmes and fundraising ‘edutainments’ for many years and continues to work as an actor exploring new characters, with credits in popular TV series (eg Howards Way, Life Begins, New Tricks, Hustle, etc).

In 2014 he founded the Surrey Hills Community Radio station, based in Leatherhead.

Find us on a map